Every day I pass it walking a dog. It was an amazing and impressive i the past.

The Combined Heat and Power Plant Szombierki has been an inherent component of the landscape of Bytom since it was opened on 29 November 1920. The investor and the first owner of the power plant was the German company Schaffgotsh Bergwerksgesellschaft GmbH, belonging to the Upper Silesian family line of the Schaffgotschs. The rated power of 100 MW put Szombierki among the greatest power plants in the country and in Europe.
During a visit to the plant you can become acquainted with the heat and electric energy generation process in the combined heat and power plant, whose operation is based on the hard coal combustion. It is also an interesting and inspiring space for the fans of industrial tours as well as artists and participants of artistic and sports events.
Route chronicle
The building was constructed in the modernist style according to the design of architects Emil and George Zillman, the authors of the designs of Giszowiec and Nikiszowiec settlements in Katowice. The construction of the CHP Plant Szombierki was commenced after the end of the World War I. According to a legend, originally, it was supposed to be an explosives factory; however, eventually the building was redesigned in order to serve as a power plant. The plant was opened on 29 November 1920. A four-sided Siemens & Halske clock was mounted on the power plant tower in 1925. It was coupled with 54 clocks operating in the plant. In the years 1939-1944 Szombierki Power Plant had the maximum output of 100 MW. 900 people worked there at that time. It could be considered then to be one of the largest power plants in Europe. 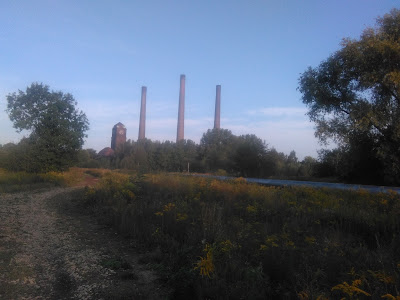