Sicily is an island which belongs to Italy. It is a island which is located between Europe and Africa. The capital of Sicily is Palermo.

( WIKI) Sicily (/ˈsɪsᵻli/ siss-i-lee; Italian: Sicilia [siˈtʃiːlja], Sicilian: Sicìlia) is the largest island in the Mediterranean Sea. It constitutes an autonomous Region of Italy, along with surrounding minor islands, officially referred to as Regione Siciliana (in Italian, Sicilian Region) .
Sicily is located in the central Mediterranean Sea, south of the Italian Peninsula, from which it is separated by the narrow Strait of Messina. Its most prominent landmark is Mount Etna, the tallest active volcano in Europe, currently 3,329 m (10,922 ft) high, and one of the most active in the world. The island has a typical Mediterranean climate.
The earliest archaeological evidence of human activity on the island dates from as early as 12,000 BC. By around 750 BC, Sicily had three Phoenician and a dozen Greek colonies and, for the next 600 years, it was the site of the Sicilian Wars and thePunic Wars, which ended with the Roman Republic's destruction of Carthage at the battle of Carthage (c. 149 BC).
Sicily frequently changed hands after the fall of the Roman Empire in the 5th century AD, and it was ruled during the early Middle Ages by the Vandals, Ostrogoths, Byzantine Empire, and the Emirate of Sicily. The Norman conquest of southern Italy led to the creation of the Kingdom of Sicily, which was subsequently ruled by the Hohenstaufen, the Capetian House of Anjou, Spain, theHouse of Habsburg, and then finally unified under the House of Bourbon with the Kingdom of Naples as the Kingdom of the Two Sicilies.
It became part of Italy in 1860 following the Expedition of the Thousand, a revolt led by Giuseppe Garibaldi during the Italian unification, and a plebiscite. Sicily was given special status as an autonomous region after the Italian constitional referendum of 1946.
Sicily has a rich and unique culture, especially with regard to the arts, music, literature, cuisine, and architecture. It is also home to important archaeological and ancient sites, such as the Necropolis of Pantalica, the Valley of the Temples, and Selinunte. 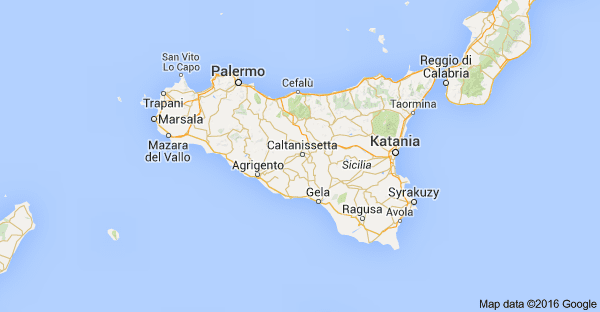 I have landed in Inernational Airport in Catania. Then I went by bus from Catania to Canicati then I was taken by friends to Racalmuto - the small town of Province Agrigento. 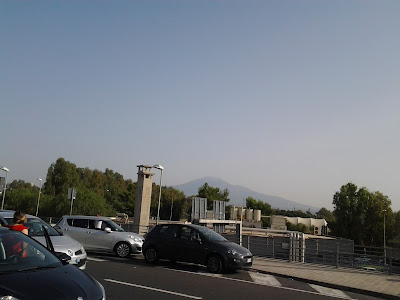 Catania airport - in the background Etna volcano is visible. 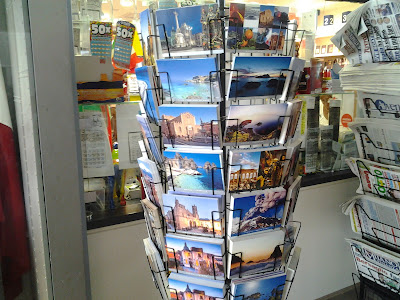 Mount Etna (pronunciation: /ˈɛtnə/; Italian: Etna [ˈɛtna] or Mongibello, Sicilian: Mungibeddu or â Muntagna, Latin: Aetna) is an active stratovolcano on the east coast of Sicily, Italy, in the Province of Catania, between Messina and Catania. It lies above the convergent plate margin between the African Plate and the Eurasian Plate. It is the tallest active volcano in Europe, currently 3,329 m (10,922 ft) high, though this varies with summit eruptions. It is the highest mountain in Italy south of the Alps. Etna covers an area of 1,190 km2 (459 sq mi) with a basal circumference of 140 km. This makes it by far the largest of the threeactive volcanoes in Italy, being about two and a half times the height of the next largest, Mount Vesuvius. Only Mount Teide inTenerife surpasses it in the whole of the European–North-African region. In Greek Mythology, the deadly monster Typhon was trapped under this mountain by Zeus, the god of the sky and thunder and king of gods, and the forges of Hephaestus were said to also be located underneath it.
Mount Etna is one of the most active volcanoes in the world and is in an almost constant state of activity. The fertile volcanic soils support extensive agriculture, with vineyards and orchards spread across the lower slopes of the mountain and the broad Plain of Catania to the south. Due to its history of recent activity and nearby population, Mount Etna has been designated a Decade Volcano by the United Nations. In June 2013, it was added to the list of UNESCO World Heritage Sites.( wiki)