Today ids the first day of  New Year and in my place weather is cold but sunny and we do not have any snow. But I am thinking about summer and holidays.
I have not decided yet where to go and what to visit. Yesterday I was inspired by my friend from Italy which sent me a great photo of Cathedral in Palermo / Sicily. I think I visit Italy once again because 2/3 world famous landmarks are located in Italy. I would like to visit Sicily again but not in the summer when it is too hot for walking. North of Italy is my dream, too. 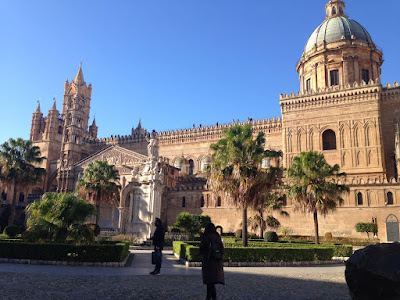 The church was erected in 1185 by Walter Ophamil (or Walter of the Mill), the Anglo-Norman archbishop of Palermo and King William II's minister, on the area of an earlier Byzantine basilica. By all accounts this earlier church was founded by St. Gregory and was later turned into a mosque by the Saracens after their conquest of the city in the 9th century. Ophamil is buried in a sarcophagus in the church's crypt. The medieval edifice had a basilica plan with three apses, of which only some minor architectural elements survive today.
The upper orders of the corner towers were built between the 14th and the 15th centuries, while in the early Renaissance period the southern porch was added. The present neoclassical appearance dates from the work carried out over the two decades 1781 to 1801, and supervised by Ferdinando Fuga. During this period the great retable by Gagini, decorated with statues, friezes and reliefs, was destroyed and the sculptures moved to different parts of the basilica. Also by Fuga are the great dome emerging from the main body of the building, and the smaller domes covering the aisles' ceilings. 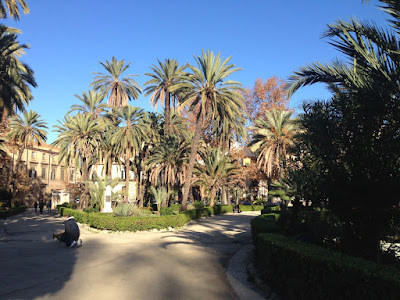 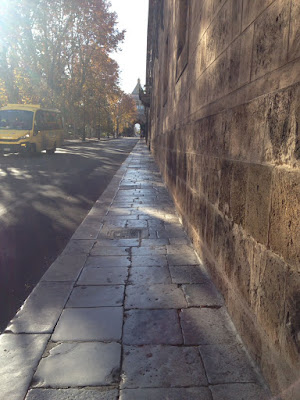 In this cathedral, synthesis of history and art of the last millennium in Sicily, in addition to the Norman kings were also crowned Vittorio Amedeo II of Savoy and Carlo III of Bourbon.
In the right aisle, the first and second chapel, communicating with one another, they preserve the imperial and royal tombs of the Normans, those of Frederick II and father of Henry VI.
The sarcophagus of Frederick II is surmounted by a canopy with porphyry columns and the urn is supported by two pairs of lions, together with those of Federico II were also preserved the remains of Peter II of Aragon. Other tombs are those of Constance of Aragon (1183-1222), sister of the king of Aragon, the wife of Frederick II, William, duke of Athens son of Frederick III of Aragon, and of the empress Constance d'Altavilla, daughter of Roger II and mother of Federico II

The "treasure of the cathedral", which is composed of sacred vestments from the 16th and 18th centuries, frontals, monstrances, chalices, a breviary miniato of the 15th century and the tiara gold Constance of Aragon. Other precious objects, enamels, embroidery and jewelry, are exposed in central message boards such as for example the breviary parchment of the 1452 coat of arms with an Archbishop Simon from Bologna. The system of bells currently mounted is composed of eight elements assembled with the ambrosian ( from Wiki) 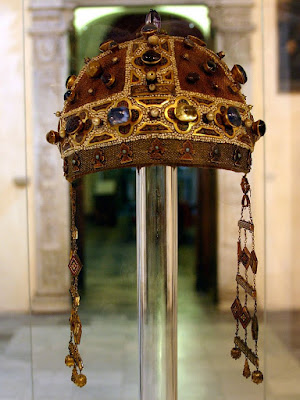