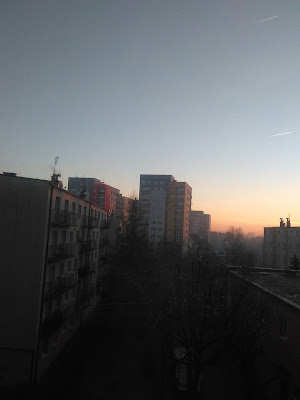 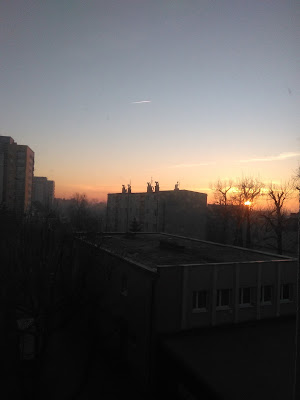 Today most Polish celebrate Three Kings Day because it is national holiday so schools, offices and shops are closed today. So I was at home relaxing and watching some interesting films on You Tube.

This January we have a severe and frost winter. We did not have winter since 2006. Temperature today was -12 degrees all day and we are expecting much more frosty night. Theses photos I took from my kitchen window at 4p.m.

Today, on the 6th of January, falls the Epiphany: a major holiday that is widely celebrated around the country under the name of the Three Kings’ Day. More importance is placed on its  celebrations in Poland than in other places around the world.
This holiday is a connection between two dates with the most religious significance for the Roman Catholic Church: Christmas and Easter. It is the day that officially marks the beginning of carnival, the period of feasting and fun that lasts until Lent starts. The 6th of January, which is now also a bank holiday, commemorates the day when the Three Wise Men arrived to meet Jesus, twelve days after his birth, to greet him and pay tribute to him.
During the holiday, one can be amazed by the various, colourful processions and parades that occupy the streets of several of the major cities and of numerous smaller towns. It is not an old tradition, but now it caught on and is happily welcomed by all. A parade like that includes playing out the journey and arrival of the Three Wise Men, together with costumes and sometimes even complete with riding camels!
They hand out candy, there are contests for the young and the old and it all usually ends with carolling on the streets. It is not the all, though the other celebrations aren’t as bright and loud. After the processions, people usually gather in churches to pray together and listen to priests preach about the importance of this holiday, which symbolises the path that people need to travel to reach the light of the Lord, and how people should focus on the missionary aspect of the Church – helping people reach the end of this travel.
Religious celebrations aren’t only held in the church, though. What a foreigner might be curious about are the letters K+M+B and a year written with chalk on the doorways of many Polish houses. They stand for the names of the Three Magi:
Signing is also abbreviation of Latin phrase Christus Mansionem Benedicat – “May Christ bless the house”.
All in all, the Day of the Three Wise Men is quite a thing in Poland, involving the majority of Catholics in collective celebrations and religious reflection. It’s also a beautiful sight of colourful streets full of people that gather with a common goal to commemorate unity and friendship. ( from Wiki)
Posted by Gosia at 11:10