13th May 2015
The Mevlâna Museum, located in Konya, Turkey, is the mausoleum of Jalal ad-Din Muhammad Rumi, a Persian Sufi mystic also known as Mevlâna or Rumi. It was also the dervish lodge (tekke) of the Mevlevi order, better known as the whirling dervishes.
Sultan 'Ala' al-Din Kayqubad, the Seljuk sultan who had invited Mevlâna to Konya, offered his rose garden as a fitting place to bury Baha' ud-Din Walad (also written as Bahaeddin Veled), the father of Mevlâna, when he died on 12 January 1231. When Mevlâna died in 17 December 1273 he was buried next to his father.
Mevlâna's successor Hüsamettin Çelebi decided to build a mausoleum (Kubbe-i-Hadra) over his grave of his master. The Seljuk construction, under architect Behrettin Tebrizli, was finished in 1274. Gürcü Hatun, the wife of the Seljuk Emir Suleyman Pervane, and Emir Alameddin Kayser funded the construction. The cylindrical drum of the dome originally rested on four pillars. The conical dome is covered with turquoise faience.
However several sections were added until 1854. Selimoğlu Abdülvahit decorated the interior and performed the woodcarving of thecatafalques.
The decree of 6 April 1926 confirmed that the mausoleum and the dervish lodge (Dergah) were to be turned into a museum. The museum opened on 2 March 1927. In 1954 it was renamed as "Mevlâna Museum".
One enters the museum through the main gate (Devisan Kapısı) to the marble-paved courtyard. The kitchen of the dervishes (Matbah) and the Hurrem Pasha tomb, built during the reign of Süleyman the Magnificent, are located on the right side. On the left side are 17 dervish cells lined up, covered with small domes, and built during the reign of Murad III. The kitchen was also used for educating the dervishes, teaching them the Sema. The ṣadirvan (washing fountain) in the middle of the courtyard was built by Yavuz Sultan Selim.
One enters the mausoleum and the small mosque through the Tomb gate (Türbe Kapisi). Its two doors are decorated with Seljuk motifs and a Persian text from mollah Abdurrahman Cami dating from 1492. It leads into the small Tilavet Room (Tilavet Odası) decorated with rare and precious Ottoman calligraphy in the sülüs, nesih, and talik styles. In this room the Koran was continuously recited and chanted before the mausoleum was turned into a museum.
One enters the mausoleum from the Tilavet Room through a silver door made, according to an inscription on the door, by the son ofMehmed III in 1599. On the left side stand six coffins in rows of three of the dervishes (Horasan erler) who accompanied Mevlâna and his family from Belkh. Opposite to them on a raised platform, covered by two domes, stand the cenotaphs belonging to the descendants of the Mevlâna family (wife and children) and some high-ranking members of the Mevlevi order.
The sarcophagus of Mevlâna is located under the green dome (Kibab'ulaktab). It is covered with brocade, embroidered in gold with verses from the Koran. This, and all other covers, were a gift of sultan Abdul Hamid II in 1894. The actual burial chamber is located below it. Next to Mevlâna's sarcophagus are several others, including the sarcophagi of his father Bahaeddin Veled and his son Sultan Veled. The wooden sarcophagus of Mevlâna dates from the 12th century now stands over the grave of his father. It is a masterpiece of Seljuk woodcarving. The silver lattice, separating the sarcophagi from the main section, was built by Ilyas in 1579.
The Ritual Hall (Semahane) was built under the reign of Süleyman the Magnificent at the same time as the adjoining small mosque. In this hall the dervishes used to perform the Sema, the ritual dance, on the rhythm of musical instruments such as, the kemence (a small violin with three strings), the keman (a larger violin), the halile (a small cymbal), the daire (a kind of tambourine), the kudüm (a drum), the rebab(a guitar) and the flute, played once by Mevlâna himself. All these instruments are on display in this room, together with an ancientKirşehir praying rug (18th century), dervish clothes (Mevlâna's included) and four crystal[citation needed] mosque lamps (16th century, Egyptian Mameluk period). In this room one can also see a rare Divan-i-Kebir (a collection of lyric poetry) from 1366 and two fine specimens of Masnavis (books of poems written by Mevlâna) from 1278 and 1371.
The adjoining small mosque (Masjid) is now used for the exhibition of a collection of old, illustrated Korans and extremely valuable prayer rugs. There is also a box (Sakal-i Ṣerif), decorated with nacre, containing the Holy Beard of Muhammad.
The mausoleum was depicted on the reverse of the Turkish 5000 lira banknotes of 1981-1994.[1] 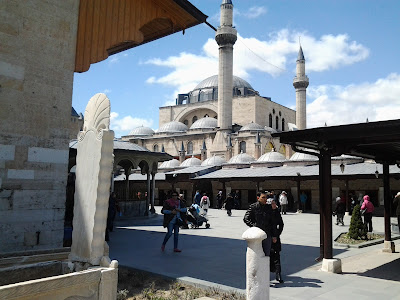 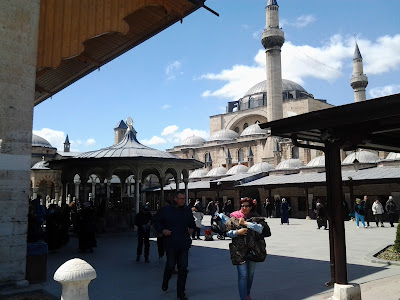 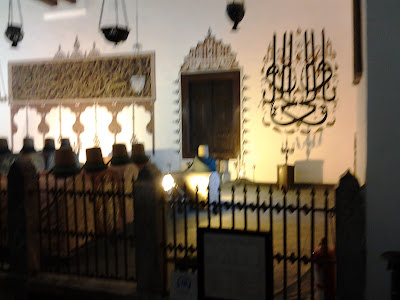 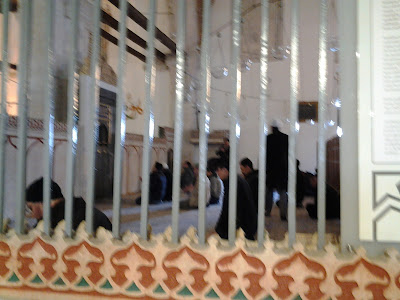 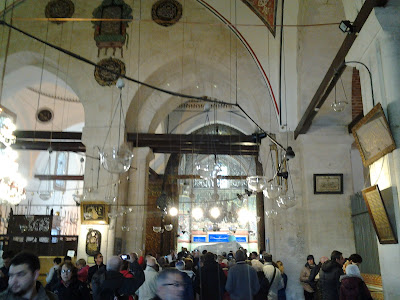 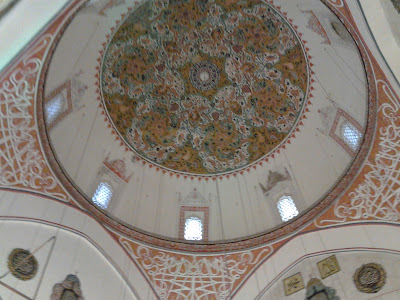 It is an amzing place to visit. So different from Europe.. 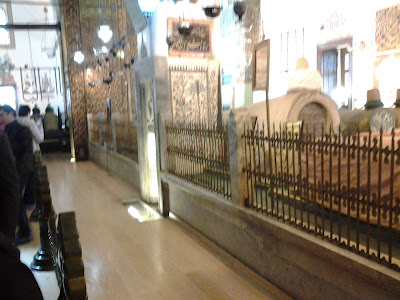 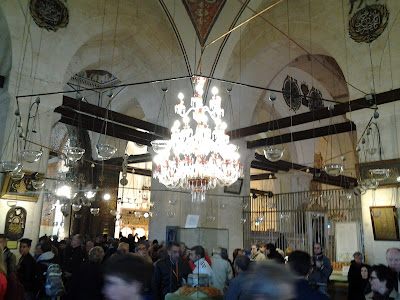