2nd May 2016
Today is a Flag Day has been celebrated in Poland since an act of parliament passed in February 2004 and is commemorated alongside Polonia and Poles Abroad Day. 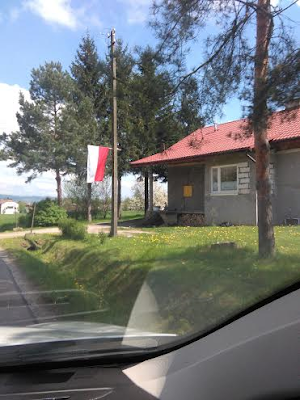 The I took in the countryside yestarday.
Polish Flag Day commemorates raising of the Polish flag on the Victory Column in the city of Berlin on May 2, 1945, at the end of the Battle of Berlin. The flag was hoisted by Polish Army troops who fought alongside their Soviet allies.
The national flag of Poland is a horizontal bicolor. The upper stripe is white and the lower stripe is read. These colors has been officially considered the national colors of Poland since 1831. Both of them were present on the coats of arms of Poland and Lithuania, two constituent nations of the Polish-Lithuanian Commonwealth.
The flag of Poland was officially adopted in 1919. There is a variation of the flag that contains the national coat of arms in the middle of the upper stripe. It is used at sea and abroad. The naval ensign of Poland also has a swallow-tail.( WIKI)