23rd February 2016
I love travelling and I love cities which are located at the Baltic Sea. One of these cities is Gdansk -which is very old city and what is more "cradle of freedom"  Last summer walking in the street I noticed very interesting monument which commemorated Jews children.
Several months before the outbreak of the World War II, when the situation in Europe was no longer giving any hope for peace, the evacuation of Jewish children from the Nazi-dominated areas or areas which were at risk from Nazi aggression commenced. The purpose of the operation was to save the young generation from the forthcoming war.  It consisted of separating Jewish children and teenagers (about 10 000 altogether) from their families and placing them in Great Britain with the intention of subsequently settling them in the Jewish Promised Land – Palestine. This traumatic experience (many children never saw their relatives again) was for  most of the evacuees the only way to be saved from the felonious plans of the Nazis and the upsurge of anti-Semitism. The evacuation was carried out in the territories of Germany, Austria, which was a part of The Third Reich, Czechoslovakia, which was under Nazi occupation, and Poland together with the Free City of Gdansk. 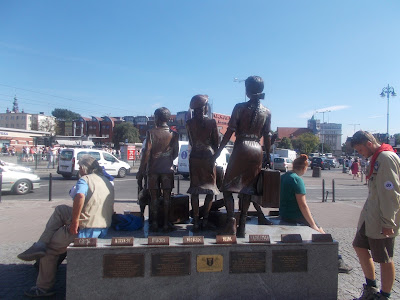 The author of the monument in Gdansk is Frank Meisler, who, as a child, was evacuated from Gdansk. The monument in front of the Main Railway Station is the third of Meisler’s works, two similar monuments having been made for London and Berlin. Together they constitute the three parts of the story of the Jewish children’s fate. The Berlin monument, entitled “Trains to life, trains to death” depicts two groups of children – one symbolizes the saved ones, the other, the exterminated ones. Comparing the faces of the children on the monuments in Gdansk and London we notice that they are the same people: in Gdansk they are waiting to get on the train, in London they have just got off the train… The Gdansk monument was unveiled on the 6th of May 2009 in the presence of the people who, like its author, were evacuated from Gdansk during the Kindertransport operation.
In 2006 the transparent reproduction of “The Last Judgement” by Hans Memling, a Flemish painter, was placed in the large, semicircular window of the main hall of the Main Railway Station overlooking Podwale Grodzkie.
( wikipedia) 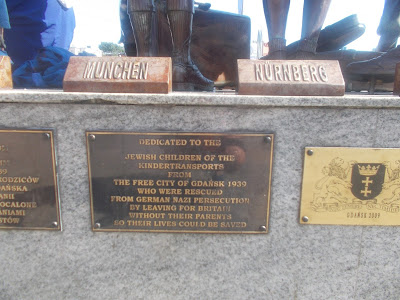 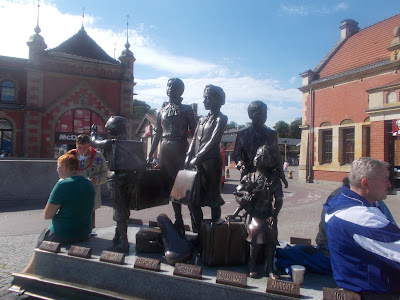