Bugle-call is the only musical signal in the world which has been regularly played every hour for six hundred years. No one knows when exactly the tune was created, nothing is known about its composer. Probably it wandered to Poland from Hungary in the second half of the 14th century during the reign of king Louis or his daughter Jadwiga. The fact that the bugle was played from the higher of St. Mary's towers has been confirmed by the city accounts dating from as early as 1392.
St.Mary's Tower , adorned with a golden crown and dominating the Main Market 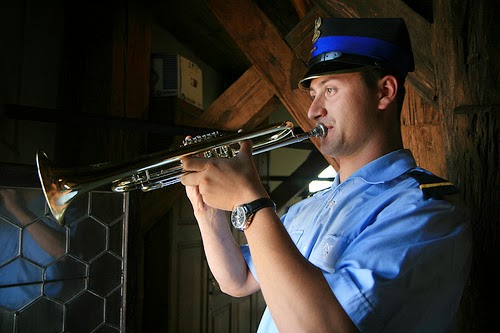 Square, is the place from which the oldest regular musical programme in the world has been broadcast, regularly since 16th April 1927. The Cracow bugle-call has been transmitted every day at 12.00 except during the times of Nazi occupation.
When the programme was first introduced, the BBC offered to broadcast the signal by British radio. However the condition was that it would be transferred to Warsaw. But Cracow could not consent to that proposal- it would mean selling its soul.
Posted by Gosia at 13:22