The Cracow's mounds are the only grouping of earth monuments in a European city. No one knows what the oldest mounds were?. Where the places of worship? Burial places of military leaders? The two oldest man -made hills are older than a thousand years.  They remain mysterious historic landmarks.  Probably for this reason they have been associated with legendary, mythical heroes.
The Krakus Mound is believed to have been the burial places of the legendary Duke who was the founder of the city. The Mound rises on the right bank of the Vistula River, ( 255 metres above the sea level) , 16 metres high and has diameter of more than 50 metres at the base. It was probably constructed in the 7 th century, which may be true, as an Avar wrought - bronze belt-buckle was found in the interior. Once the mound used to be a place of pagan cult. 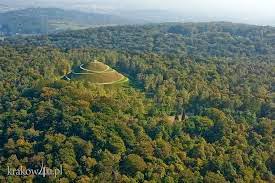 The highest of Cracow's mound, the Mound of Independence, is considered a Tomb of Tombs- 36 metres highit rises 358 metres above the sea level in Western part of the city. 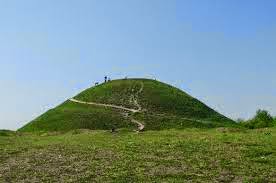 The Mound of Wanda, daughter of Krak, is also believed to be a thomb. Legend has it the body of the Duke's daughter was placed here after it was taken from the water of Vistula River, where she had jumped , preferring death to marrying a foreigner. It has a diameter of 45 metres at the base  and rises 14 metres .