Shrine of Jasna Gora in Czestochowa

The Monastery of Jasna Góra in Częstochowa, Poland, is the third-largest Catholic pilgrimage site in the world. Home to the beloved miraculous icon of Our Lady of Częstochowa, the monastery is also the national shrine of Poland and the center of Polish Catholicism. 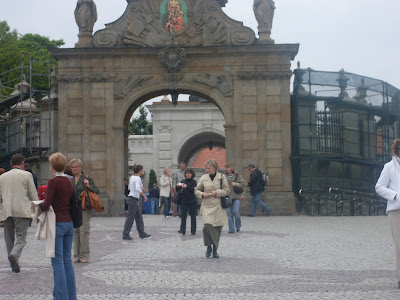 The main entrance to shrine.

Czestochowa is a city which belongs to Upper Silesia Province. It is located about 60 km from my home town. The city is very famous around the world for his shrine. I have been there many time but last 2 years ago. Personally I think it is a charming place but too crowded every season. 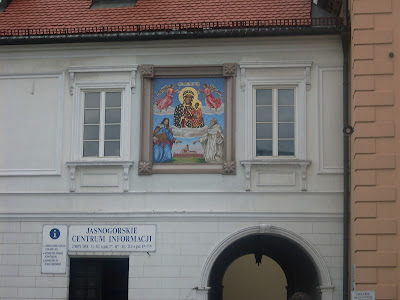 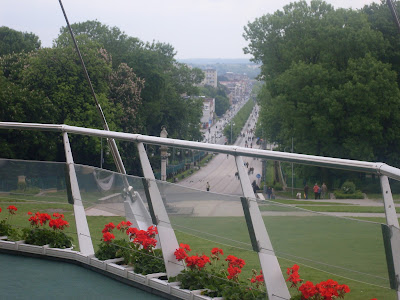 The view from the shrine- so nice. 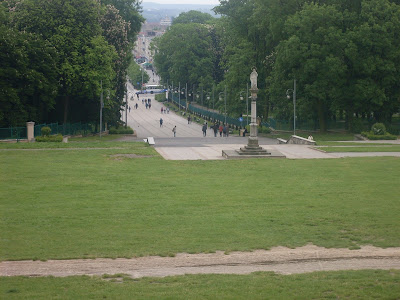 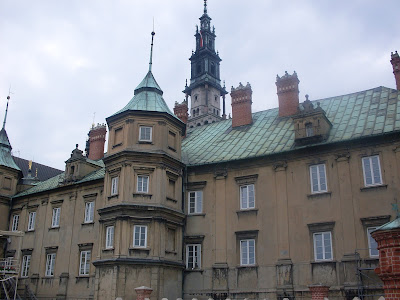 The view of monastery 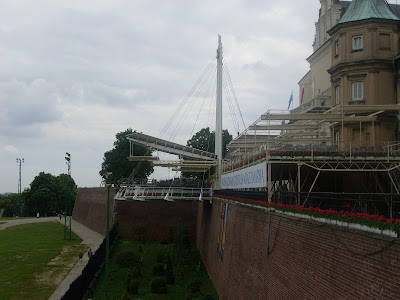 According to tradition, the icon of Jasna Góra was painted by Luke the Evangelist on a tabletop built by Jesus himself, and the icon was discovered by St. Helen, mother of Emperor Constantine and collector of Christian relics in the Holy Land. The icon was then enshrined in the imperial city of Constantinople, according to the legend, where it remained for the next 500 years.
In 803, the painting is said to have been given as a wedding gift from the Byzantine emperor to a Greek princess, who married a Ruthenian nobleman. The image was then placed in the royal palace at Belz, where it remained for nearly 600 years.
History first combines with tradition upon the icon's arrival in Polandin 1382 with a Polish army fleeing the Tartars, who had struck it with an arrow.
Legend has it that during the looting of Belz, a mysterious cloud enveloped the chapel containing the image. A monastery was founded in Częstochowa to enshrine the icon in 1386, and soon King Jagiello built a cathedral around the chapel containing the icon.
However, the image soon came under attack once again. In 1430,Hussites (pre-Reformation reformers) attacked the monastery, slashed the Virgin's face with a sword, and left it desecrated in a puddle of blood and mud.
It is said that when the monks pulled the icon from the mud, a miraculous fountain appeared, which they used to clean the painting. The icon was repainted in Krakow, but both the arrow mark and the gashes from the sword were left and remain clearly visible today.
The miracle for which the Black Madonna of Częstochowa is most famous occurred in 1655, when Swedish troops were about to invade Częstochowa. A group of Polish soldiers prayed fervently before the icon for deliverance, and the enemy retreated. In 1656, King John Casimir declared Our Lady of Częstochowa "Queen of Poland" and made the city the spiritual capital of the nation.
The Virgin again came to the aid of her people in 1920, when the Soviet Russian Red Army gathered on the banks of the Vistula River, preparing to attack Warsaw. The citizens and soldiers fervently prayed to Our Lady of Częstochowa, and on September 15, the Feast of Our Lady of Sorrows, she appeared in the clouds above Warsaw. The Russians were defeated in a series of battles later dubbed the "Miracle at the Vistula."
During Nazi occupation, Hilter prohibited pilgrimages to Jasna Góra, but many still secretly made the journey. In 1945, after Poland was liberated, half a million pilgrims journeyed to Częstochowa to express their gratitude. On September 8, 1946, 1.5 million people gathered at the shrine to rededicate the entire nation to the Immaculate Heart of Mary. During the Cold War, Jasna Góra was a center of anti-Communist resistance.
Pope John Paul II, a native of Poland, was a fervent devotee of the Virgin Mary and of her icon at Częstochowa. As pope, he made pilgrimages to pray before the Black Madonna in 1979, 1983, 1991, and 1997. In 1991, he held his Sixth World Youth Day at Czetochowa, which was attended by 350,000 young people from across Europe.
Other popes have honored the "Queen of Poland" as well. Pope Clement XI officially recognized the miraculous nature of the image in 1717 and in 1925 Pope Pius XI designated May 3 a feast day in her honor. Pope Benedict XVI visited the shrine on May 26, 2006.

What to See at Jasna Gora Monastery

The large baroque monastery of Jasna Góra dominates a hilltop in Częstochowa and is always bustling with pilgrims and worshippers. As pilgrims approach the monastery, the most striking sight is the 106-meter belltower, reconstructed in 1906 (the bottom part dates from 1714).
The second level contains four clocks, one on each side, that mark the passage of each 15 minutes with Marian melodies. Inside the third level are statues of St. Paul the Hermit, St. Florian, St. Casimir and the Saint-Queen Hedvig; the fifth level has statues of the church fathers St. Leo the Great, St. Gregory, St. Augustine and St. Ambrose.
The focus of pilgrims to Jasna Góra is not the monastery, but theicon of Our Lady of Częstochowa, which is displayed in a altar in the Chapel of the Black Madonna. The icon shows a serious Mary holding the infant Jesus on her left arm and gesturing towards him with her right hand. The Virgin's gaze is intense —pilgrims are moved by the way she seems to look right at them.
The Virgin's robe and mantle are decorated with lilies, the symbol of the Hungarian royal family. The infant Jesus is dressed in a red tunic and holds a Bible in his left hand and makes a gesture of blessing with his right. The Virgin and Child are dressed in bejeweled velvet robes and gold crowns for special occasions.
The image has been placed in a gold frame decorated with hundreds of precious jewels, and stands on an altar of ebony and silver donated by the Grand Chancellor George Ossoliński in 1650.
The altar with the icon is separated from the rest of the Chapel of the Black Madonna with a floor-to-ceiling iron screen. The large Gothic chapel includes five other altars, the most notable of which is the Altar of the Crucifix, to the right of the icon. Its cross dates from 1400. The walls of the chapel are full of ex-votos left by grateful pilgrims.
Attached to the Chapel of the Black Madonna is the baroquebasilica, named the Church of the Holy Cross and Nativity of Mary. Rebuilt between 1692 and 1695, it has three aisles and ceilings decorated with accounts of the miracles of Our Lady of Częstochowa. The main altar was designed by the Italian artist Giacomo Antonio Buzzini between 1725 and 1728.
The monastery's treasury is a rich storehouse of votive offerings given to the Black Madonna over the centuries, from the 14th century to the present. Gifts range from swords and scepters to rosaries made of dried bread in concentration camps.
Kings, queens and popes have donated a vast array of precious objects, such as King Michael Korybut Wiśniowiecki and the Archduchess Eleanor of Austria on the occasion of their wedding in Jasna Góra in 1670. Also donated to the Virgin are tear-gas cylinders used by the Communists against Solidarity protestors in the 1980s, and the Nobel Peace Prize won by Lech Walesa in 1983.
There is also a richly decorated library housing precious manuscripts. Since 1920, the library has hosted the meetings of the Polish Episcopal Conference.
Around the perimeter of the basilica, where the moat once was, are the 14 Stations of the Cross represented by bronze statues sculpted by Pius Weloński in 1913. Nearly every pilgrim group prays at the Stations of the Cross; some move from one station to the next on their knees, Wikipedia

The holy icon of Our Lady of Częstochowa dressed in special robes. © Jasna Gora Monastery