I visited Wadowice only once. It was in 2011 before I started blogging. Wadowice is a small charming town located in the countryside. Here Karol Wojtyła - later  John Paul II - the Pope was born. John Paul II not only was the Pope but he helped to collapse communism in my homeland and in other Eastern Europe countries. 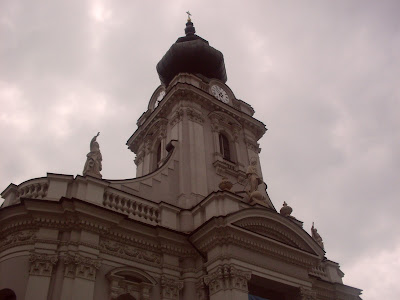 The church where John Paul II was baptized.

The most important is the nearby church itself as the future John Paul II grew up in its shadow, was baptized a Catholic and later confirmed in it, served as an altar boy and prayed daily here before its miraculous picture of Our Lady of Perpetual Help. The church’s Gothic chancel dates from the 15th century while the late-Baroque nave and aisles were built in the 1790s. The left aisle contains a baptismal font where the baby Karol Wojtyla was baptized.
Also the high school where young Karol Wojtyla was educated has remained in place. 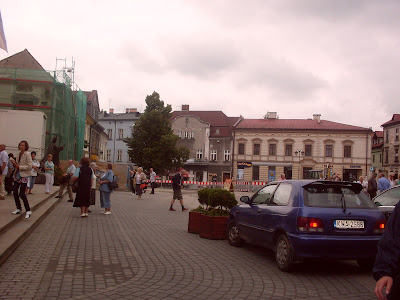 The centre of the town . It is popular with tourists.

Wadowice, small city of about 20,000 some 30 miles southwest of Krakow, has got international recognition as the birthplace of Pope John Paul II. Born in 1920 as Karol Wojtyla, the future Pontiff lived in Wadowice till 1938 when he moved to Krakow to study at its ancient Jagiellonian University. Yet to his last days the late Holy Father remembered fondly his Wadowice youth and places associated with it, the schoolmates, his teachers, and other local folks he had used to know. Also, he tried to include the town, when possible, in his visits to Poland. 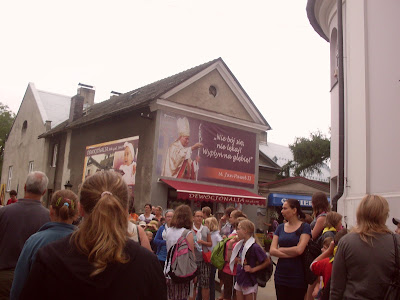 Tourists seek in Wadowice sites connected with Pope John II. Their first obvious choice is the house at 7 Koscielna street with flat where the future Vicar of Christ was born and raised. The place has been turned into a museum exhibiting The Wojtylas family’s former possessions such as an oven, a shelf, a table, tableware, a laundry basket, family pictures as well as personal belongings of Father Karol Wojtyla – skis, a rucksack, a cap, a prayer book, etc. Reopened in 2014 after a thorough remodeling and enlargement, now it relies heavily on multimedia. (wikipedia) 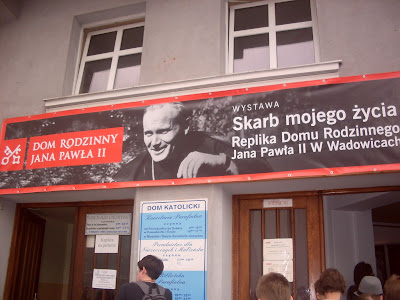 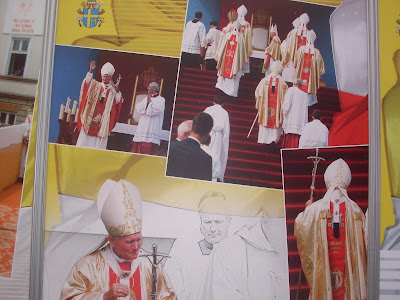 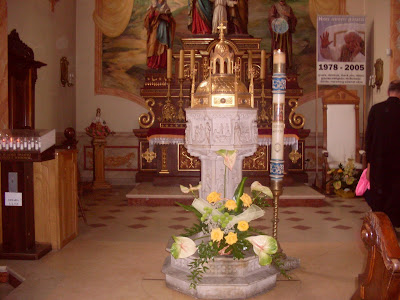 Baptistery where the future pope was baptized on June 20, 1920.. 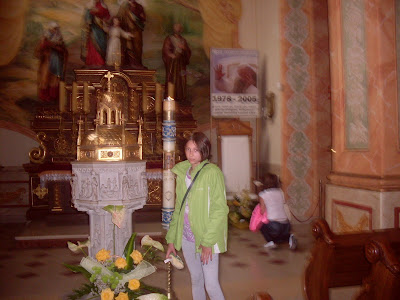 My daughter next to the baptisery in 2011. 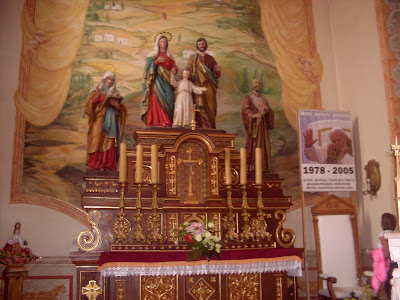 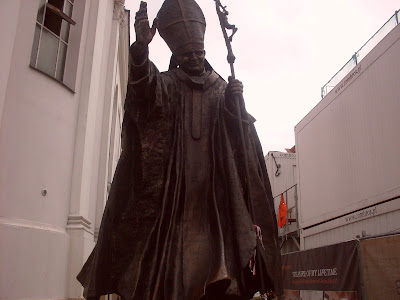 The monument of the Pope. 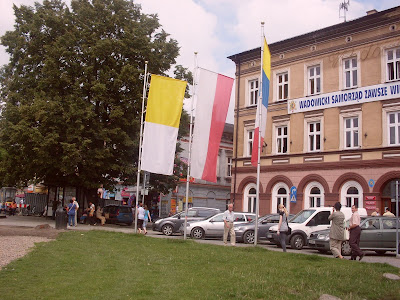 Centre of the town.

The history of the town of Wadowice can be traced back to the 13th century. First it belonged to the princedom of the Silesian Piasts, next to form a part of the Principality of Oswiecim that would morph later into Principality of Zator. In 1482 the short-lived Principality of Wadowice was created that lasted 11 years. Returned to the Zator statelet, in 1495 Wadowice was bought with it by Poland and incorporated to the powerful kingdom. During the first partition of Poland in 1772 the Austrian Empire annexed the southern part of the Krakow province, including Wadowice. In 1867 the town was made the capital of a county, which brought it new prosperity. In 1918, after the Great War, Wadowice returned to Poland reborn as a republic. At the outset of the Second World War, when the Nazi Germany invaded Poland in 1939, Wadowice was annexed to the Third Reich. Since the end of the WWII the town has been Poland again.
Modern Wadowice.
Wadowice has a life beyond tourism. The city is fairly industrious and it has nurtured a number of successful enterprises. One of them, Maspex, has grown from a small instant-cocoa trader in 1990 to Poland's largest food-processing conglomerate in 2015, with the combined annual turnover approaching euro one billion.
Posted by Gosia at 03:03