The Monument of the Fallen Shipyard Workers in Gdansk

Gdansk is not only a very popular tourist destination but the spot with historical significance. On the way to the beach we saw the Monument of the Fallen Shipyard Workers 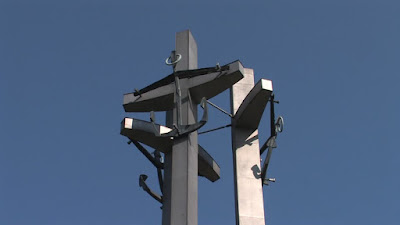 Lying right outside famous gate no. 2 to the Gdansk Shipyards, the monument was unveiled in 1980 to commemorate the events of 1970 when 45 people died during street riots protesting against the communist regime.

Along with wage demands and the right to form free trade unions, the right to erect this memorial was one of Solidarity's main demands during the 1980 lock-in. The 42-metre, 139-tonne steel sculpture stands on the spot where the first three victims of the 1970 riots were killed. There are three crosses to represent the three victims and the crosses themselves signify the suffering and sacrifice of all the protesters. At the top you see anchors signifying the men’s profession and in the lower reaches the figures of their struggling comrades are depicted.

Solidarity leader Lech Walesa referred to this enormous steel structure as “a harpoon driven through the body of a whale. No matter how hard the whale struggles, it can never get rid of it.” 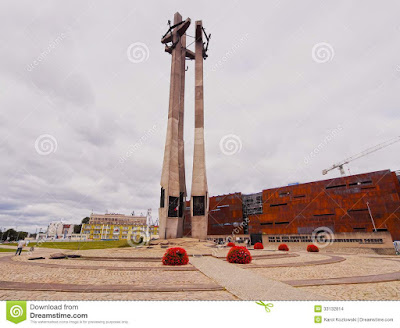 The monument is marked by a poignant inscription by Czesław Miłosz: 'You who have harmed simple man, mocking him with your laughter, you kill him, someone else will be born, and your deeds and words will be written down'.

The statue forms the centrepiece of what is known as Solidarity Square and surrounding it are several memorials and plaques dedicated to victims of totalitarianism. Overlooking the square is the new European Solidarity Centre.
Posted by Gosia at 23:30