Sausages in Poland you will find several varietes made primarily of pork, but sometimes using turkey, horse, lamb, and even bison. Few varieties to watch for including Krakowska, a Cracow speciality which uses pepper and garlic.

Biała kiełbasa (BEEYAH-wah keeyehw-BAH-sah) is fresh, uncooked and unsmoked sausage, made usually from pork shoulder and sometimes a little beef and veal, and seasoned with salt, pepper, garlic and marjoram, although this varies from family to family. It is boiled and browned or baked or even sautéed with onions. It is served hot or cold  with sauerkraut or noodles, and as a sandwich on rye bread. While eaten year-round, it is indispensable for Easter and Christmas, and in soup on Easter morning.

Kabanosy (kah-bah-NOH-sih) is the generic term for any thin stick sausage. They are usually made of pork, salt, pepper, garlic, allspice and sometimes caraway or crushed pepper for a spicy note
. But they are also made with chicken  or other meats according to the village's custom.

Kiełbaski myśliwska (keeyehw-BAH-skee mish-LEEF-skah) is a smoked and dried sausage made of pork with a touch of crushed juniper berries.

Krupniok (KRROOP-nyee-ohk) is a Silesian blood sausage that is dark and has more blood than barley (or variously, buckwheat groats - kasza). Its cousin, kiszka (KEESH-kah), also known as kaszanka (kah-SHAHN-kah), is lighter in color and has more barley or buckwheat. It was originally made to use up the scraps -- ears, snouts, organ meats -- after slaughtering a pig and was fleshed out with spices and barley or kasza. Today better cuts of meat are used. The mixture is cooked and then stuffed into the sterilized large intestine of a pig. It can be served at room temperature without further cooking or either grilled or panfried with onions. 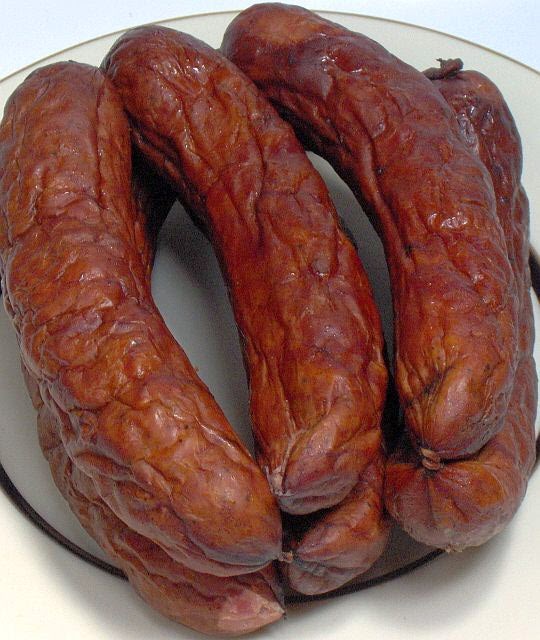 Polish kiszka (KEESH-kah), also known as kaszankaor krupniok, is sausage made with fresh pig's blood. It was originally made to use up the scraps -- ears, snouts, organ meats -- after slaughtering a pig and was fleshed out with spices and some type of grain, usually barley or buckwheat groats. Today, as is true with Pennsylvania Dutch scrapple, it can be made with choicer cuts of pork, as I have done here.

Here's a larger photo of kiszka. It can be eaten cold, heated whole on a grill or nonstick skillet, cut into rounds and fried, or removed from the casing and heated like hash.