In Poland official language is Polish but in different parts of country there are variuos dialects like Siliesian, Mazurian and others. Silesian language dialect is similiar to German language because this part of Poland has belonged for many years to Germany. There are a lot of German influences in many fields even nowadays. Silesia has had a rich tradition in folk dresses which are very multicoloured and expensive ones. Nowadays some people wear them only for national holidays. 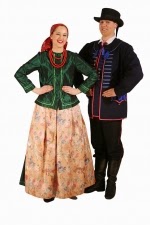 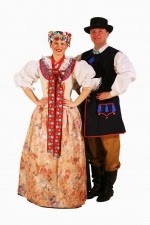 The term: “Silesian folk dress” as well as the dress from other 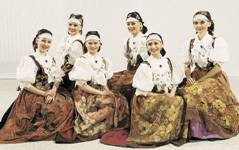 regions of Poland means first of all daily and Sunday best clothes of country people.First notes of a folk dress come from the 13th century (legend about Saint Jadwiga) clothes of peasants and craftsmen were usually plain and universal.Men were wearing hats made of straw. Women were wearing long shirts and scarves on their heads. In the 18th century the dress started to change. A bonnet on the head of a woman meant that she was married. Woman was also wearing


Koszecin is a village located in Upper Silesia and it is famous as the residence of "Slask" Song and Dance Ensemble founded in 1953. Today "Slask" still popularises the folklore of Silesia, touring all over the world. 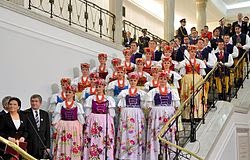